You grant your consent to all cookies by clicking on the “Accept all” button. If you want to accept only technically necessary cookies, click on the “Only necessary“ button.

Accept all Only necessary Settings
Menu

Almost circular cross-section fuselage of the aircraft is made as closed fiberglass shell with foam core. Roomy and richly glassed-in cockpit offers a great view to all directions – included right over the cockpit (and consequently to the turn in tilts). There are two adjustable seats in the cockpit with a 22 cm lengthwise shift. The seats are fitted by four-point safety belts. An unusually large and easily accessible luggage compartment is located behind the seats.

with semi-laminar airfoil MS (1) – 313 has wooden structure. The wing is rectangular in the central part and trapezial with short winglets at the ends. There are fuel tanks (2x35l) in central part in front of beam. The beam is situated in 37% of depth. This part is covered by wooden plywood, remaining parts are covered by linen. Behind the beam the wing is consists of wooden ribs with a short auxiliary beam.

The wing is fitted with electric slotted flaps with pre-programmed deflections at 13°, 29° and 37°. The flaps are wooden with plywood and a linen cover.

of wooden construction has a classic configuration with an elevator and a rudder. Vertical stabilizer is an integrated part of fuselage. Airfoil of the elevator as well as the rudder uses symmetric NACA 0012 and their construction does not differ from the construction of flaps.

The main gear is constructed as a fiberglass spring. The wheels are equipped with independent hydraulic brakes separately controlled by break valves mounted on pedals. Nose gear is towed and spring-loaded by a steel spring and a hydraulic dumper. Front gear leg is unsteerable and free to rotate in 360°.

The airplane is equipped with standard flight and engine instruments. Other instruments could be installed at customer’s request. 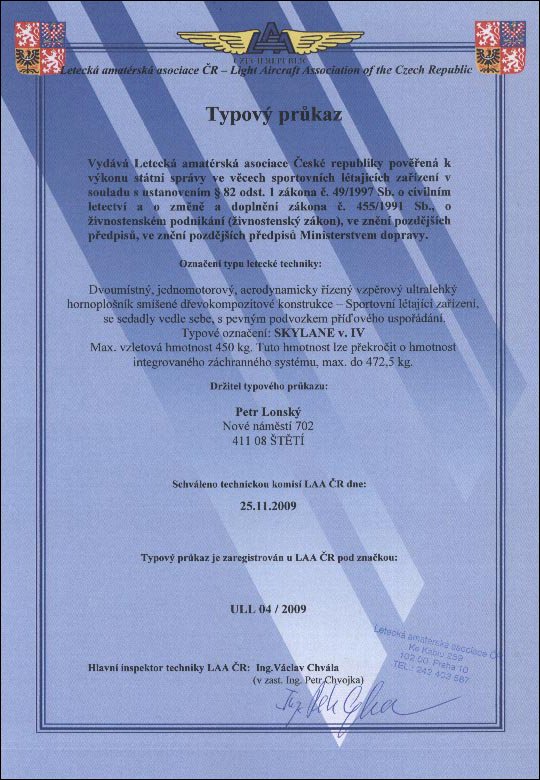 Czech certificate about manufacturing our plane.